Last week Yahoo quietly became a mobile marketing powerhouse, did you see it?

Nokia, Yahoo and Flickr announced the platform for a mobile marketing powerhouse. Yahoo already has a short code 92466 (YAHOO) for text messages.

Nokia, the world leader in mobile communications, and Yahoo!, the number one Internet destination, announced that they are making it easy for mobile photographers to upload and add comments to photos directly from their Nokia Nseries multimedia computers to Flickr, the largest online photo sharing community on the Web.

The biggest problem the physical world connection companies PWC face, is how to getting their "platform", or scanning application on the phone.

This is only a problem because they are focusing on what's best for the advertiser, not the consumer. Google didn't create Adsense, then build their search engine.

With Flicker, you have a consumer application, that utilizes a camera phone, and an extraordinary viral marketing possibility.

How does it work?

Yahoo/Nokia adds an optical character recognition application (image/code reader or they could let the Flickr server resolve it) and then all of the uploaded codes/images in/on the Flickr database become physical world hyperlinks .

These , these , and these become physical world hyperlinks.

Advertisers can then start uploading their own magazines and DVD covers. The Chanel ad gets uploaded so a mobile user can connect in ANY magazine. Don't have your own logo? There are a dozen sites that will create 2D code for you.

In my opinion, this is how mobile marketing will implement a physical world hyperlink.

Budweiser uploads their logo and a 2D code to the Flickr database. They won't care who creates the 2D code, because the Flickr community is larger than the population of all PWC company users right now.

As of Dec 2005, Flickr had over 2 million users with over 100m photos. How many registered users does Yahoo have? The number of camera phone users is only growing and the potential physical world hyperlinks is endless.

Not only will Yahoo generate revenues by "turning on" specific images for advertisers AND consumers, but they will build an analytical database to use for mobile marketing purposes later.
Google could offer the same service utlizing their Image database, but they need to create some kind of image creating/recognition application for the phone.

Until the carriers decide on which 2D code scanning platform(s) they will put on the phones, or until one of the PWC has a campaign that has enough creativity to get users to download their application to the phone, this is the platform that will kickstart physical world connection mobile marketing.

Look at what is developing.

Microsoft owns Corbis and a mobile OS. They just announced their Phone2Search than can comb 6,000 images in 3 seconds. 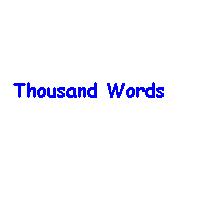 Google has Google Images, a terrific image database and the leading Internet advertiser, but no application that utilizes/controls the camera on the phone yet.

Getty Images has teamed up with Cingular and Sprint.

ActiveSymbols is using the Corbis database for its mobile service .

Yahoo owns Flickr and has the the leverage of 2 social communities for adoption.

In many ways the PWC can learn a lot from Google. They created a great consumer application, and found a way to include advertising. Looks familar doesn't it?

As I have been saying for a while now to PWC companies, open up your code, and let the consumer decide what scanning applications will be desired.

One problem your approach doesn't deal with is the inconvenience introduced into any application that depends on decoding codes (or, for that matter, classifying images) from images that must be uploaded to a server from a client phone before ANY decoding or classifying can take place. Since it is only too easy to take pictures that are poorly illuminated, or in poor focus, or have motion blur, there's little guarantee that the first photo sent will do the job -- and if the user has to take the photo under very precise conditions, that makes it inconvenient and annoying by itself.

This introduces considerable delay and unreliability into any such application, making it a far less convenient application than it can be if it's going to get wide adoption.

The only way to get ease-of-use is to do the decoding on the client phone itself. That's how all the current bar code reading phones in Asia work, and there's a reason for that.

If you want to see a company that is actually enhancing user generated content and cross device usability take a look at www.juicecaster.com

I'm not saying that camera phones will provide clear images to decode.

The key point here is Yahoo found a way to get their image platform/ community on the mobile phone.

That allows users to not only contribute to the Flickr database, but also access images that could also be in the their database (not necessarily from camera phones).