Better than a barcode, more powerful than an RFID tag, it's "Memory Spot".

This is big news for Physical World Connection, or for the Internet of Things. A major semiconductor company introduces a very versatile physical world hyperlink.

If these chips are going to link to the Internet, who will handle the database registry, Verisign? Or is Hewlett Packard going to create a new revenue stream?

Grain-Sized Chip Could Be Attached to Almost Any Object, Making Information More Ubiquitous. Vice President of HP Labs says ""We have built a device that allows us to bridge the physical and digital world," 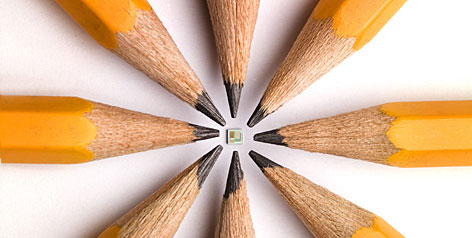 With no equal in terms of its combination of size, memory capacity and data access speed, the tiny chip could be stuck on or embedded in almost any object and make available information and content now found mostly on electronic devices or the Internet.

About the same size as a shirt button but thinner.

With a storage capacity ranging from 256 kilobits to 4 megabits in working prototypes, it could store a very short video clip, several images or dozens of pages of text. Future versions could have larger capacities.

Information can be accessed by a read-write device that could be incorporated into a cell phone, PDA, camera, printer or other implement.

The readers rely on the same radio frequency employed by Bluetooth.

To access information, the read-write device is positioned closely over the chip, which is then powered so that the stored data is transferred instantly to the display of the phone, camera or PDA or printed out by the printer. Users could also add information to the chip using the various devices.

"The basic conception of Memory Spot is similar to RFID tags, but we have data rates that are orders of magnitude higher, and higher capacity," Taub said

It doesn't say how much this chip will cost, or some other key facts. Will these chips get ipV6 addresses? Do they have problems around liquid and metal?

When a major semiconductor builds a chip and says it's sole purpose is to connect the physical world with the electronic world, you know this space will be big.
Posted by No Name at 6:06 AM

-BUT- what will it cost or do we still need the cheap barcode PWC and will the future look hybrid??