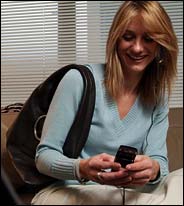 Notice how service providers are charging consumers for these services to generate more data revenues. You wouldn't have to pay for this service w/ your PC. Should you have to pay just because you're using your mobile? NO

Soon the ecommerce site or brand will go directly to the consumer and the service provider will be out of the revenue loop.

From New York Times Born to shop can use cellphone

Calling all retailers: 2006 may finally be the year that consumers start buying goods with their cellphones.

Shopping is easier now that cellphone images rival those on personal computers.
With people already spending billions on ring tones, wallpaper and games for their phones, analysts and retail executives say they believe it will not be much of a leap to get them to use their phones to buy shoes, books and laptops.

"This will start to show up on the radar screen in 2006," said Roger Entner, an analyst with Ovum, a technology consulting firm in London.

And especially around next Christmas, the convenience of shopping on a computer or a cellphone will beat the mall hands down."

EBay, which like Amazon.com offered users years ago a way to shop its site on cellphones, plans to introduce to Verizon users this month a new version of mobile phone technology that will allow subscribers, for $4 a month, to browse the site, bid on items and receive alerts whenever they have been outbid

One of eBay's challengers, Overstock.com, which sells travel services and products for fixed prices and at auction, also recently forayed deeper into the wireless realm. In November it started Mobile O, where cellphone users can use their phones to browse and buy anything on Overstock's Web site.

The service was initially intended for customers of Verizon Wireless, who pay $5 to activate it
Posted by No Name at 5:54 AM