The Most Significant Consumer Device In History

From USA Today.com A very different future is calling- on billions of cell phones

According to a report, 1 billion cell phones will be sold each year by 2009 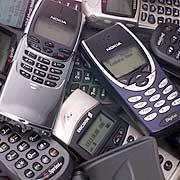 No sane person at the time ever thought these things would become the most significant electronic consumer device in history. But that's exactly what is happening.

The cell phone's impact will be so huge because — unlike those previous technologies — it's so widespread. People in developing countries who a decade ago owned nothing more complicated than a water pump now have cell phones

Last week, Gartner Group put out a report saying that by 2009, 1 billion cell phones will be sold a year. Not owned. Sold. By then, 2.6 billion people will be using cell phones, Gartner says

Anything so big and powerful literally transforms society. TVs, PCs and telephones changed everything from daily habits to the world's power structure.. Don't forget commerce and advertising

Neville Street, CEO of text-messaging company Mobile 365, puts it this way: How many inventions in history have literally become part of your person — something you always have with you?

Your watch. Your credit card. Your cell phone. That's pretty much it, unless you count tooth fillings

Search engines and advertisers, you better find a way to be a part of this.
Posted by No Name at 9:54 AM