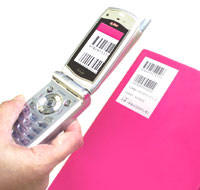 It's nice to see a major technology news medium recognize how big this will be.

From ZDNet Search technology comes to the camera phone

In the United States, people will also be able to use their cell phones to take a picture of a movie billboard, and then send the image to a similar database that returns a film trailer, locates a theater showing the movie advertised on the billboard or allows the user to buy tickets to the movie.

"One of the biggest problems of the wireless Web--it's not that people don't want it, it's that the Web is based on a keyboard and a mouse. We keep trying to simulate that with 12 keys on the phone," said Lauren Bigelow, chief marketing officer at Mobot

Neven Vision's marketing application, called iScout, turns traditional forms of advertising such as magazines, billboards, newspapers, as well as any white space on a product, into a Web marketing tool. It has signed a deal with a dairy manufacturer in Europe, which executives won't yet name, to place iScout's "hyperlinks" on milk bottles for a year.

All these surfaces in the physical world can now be hyperlinked, and they all turn into added information
Posted by No Name at 6:53 PM